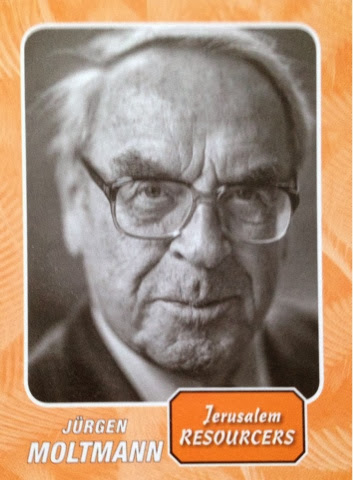 (Yes, this is a Jürgen Moltmann theologian trading card. No, it is not – yet! – autographed. Yes, I realize that to most people just owning something like this makes me a nerd. And no, this does not bother me.)

END_OF_DOCUMENT_TOKEN_TO_BE_REPLACED

I’m gearing up to re-read Moltmann’s The Crucified God with some friends next month as a group study and am intending to blog my way through it this time. In CG Moltmann articulates a theology “after Auschwitz,” which means processing through the question of  “How can we speak of God in light of such unspeakable tragedy and inhumanity?”  We could very well add to this our own experiences of suffering today, both personal and collective.   How do parents speak of God after the loss of a child? In what way can we say that God is present when natural disaster strikes, killing thousands? Or when humans, made in God’s image, commits horrible acts of violence against other humans?  How do we speak of God when genocide is still a very present reality in some parts of the world?  Is this what God had in mind when he created the world?

END_OF_DOCUMENT_TOKEN_TO_BE_REPLACED

Although I’ve become an increasing fan of the Reformed tradition (partly through my engagement with Calvin directly, but especially through modern Reformed theologians like Karl Barth and Jurgen Moltmann), I am Wesleyan-Methodist in background, which will always be in my theological DNA. And Wesleyans are, generally speaking, Arminian (not Calvinist) in their soteriology.

Roger Olson is probably the most prominent articulator and defender of Arminianism today. I have benefited much from his blog and from his book Against Calvinism (to be fair, the companion book by Michael Horton, For Calvinism, is great too!).
A while back I watched a video Q&A with Roger Olson on Calvinism and Arminianism.  (http://vimeo.com/62468956). END_OF_DOCUMENT_TOKEN_TO_BE_REPLACED
I’m attempting a second blog post from the iPad. I’m not quite a fan of the free Blogger app (it doesn’t seem to let me actually embed links or videos), but haven’t yet found anything better that is free. 2013 was a heavy reading year for me, and for the first time I actually averaged about a book a week.  Here are a few highlights from my reading. Unfortunately I didn’t quite finish NT Wrights majestic Paul and the Faithfulness of God, so it didn’t make the list only for that reason. Maybe I’ll devote a post or two to that book when I finish it (not that the internet really needs another post on it!).

END_OF_DOCUMENT_TOKEN_TO_BE_REPLACED

Not long ago I was talking with someone who informed me that he heard that I “believe” in evolution.

I wasn’t quite sure what to do with that.
My knee jerk reaction to a statement like that is one of denial, but probably not for the reason you might suspect. Usually when I discuss my beliefs with someone it is with regards to some area of theology or philosophy. It doesn’t occur to me to say that I “believe” in this scientific theory or that. I’m not a scientist, but I appreciate the work they do (and benefit from it every day!) and sometimes read books that they write. And I don’t think that they are involved in some massive conspiracy to debunk my faith. Scientists, like good theologians and biblical scholars, are concerned with the discovery of truth. My belief about a scientific theory doesn’t matter. What matters is whether it is true, and I do not posses the knowledge or skills to attempt to dispute the overwhelming evidence and consensus among specialists in relevant fields regarding the theory of evolution. (I’ll open another can of worms: I could say the same thing about climate change!)
END_OF_DOCUMENT_TOKEN_TO_BE_REPLACED